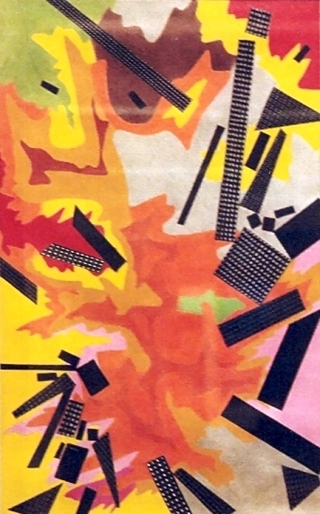 The artist works with colored pencils producing areas of glowing light and intricate networks of colored ribbons (one can imagine with what prolonged rubbings and scrubbings). At times he uses inks. On one paper he has hurled a pot of green ink and to this amorphous shape added a gleaming core and waving filaments. On another yellow ink is hurled on black paper, resulting in a horrendous anomaly of engulfing devastation. If one looks closely enough a witty parody of a well known painting, by an artist of prodigious reputation, may be described.    –Margaret Breuning, Arts Digest 29, February 1, 1955, 22. 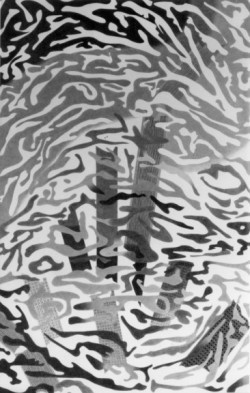 A post-script must be added about Dwight Ripley's colored drawings at the de Nagy Gallery, 206 East Fifty-third Street, collectively entitled "The Bomb." In these he dreams up witty visions of great cities after Armageddon, Pisa with its Cathedral leaning and the Tower knocked straight; Constantinople with Hagia Sophia sailing off on a carpet, etc. And in other pictures he assumes the needed role of modern art's jester. In these he is refreshingly impertinent.    –Stuart Preston, The New York Times, January 15, 1955, 11. 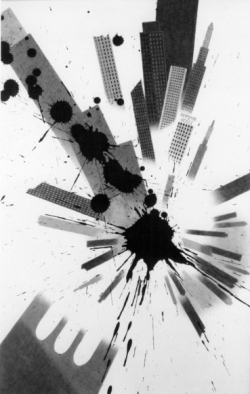 Dwight Ripley was first shown by Peggy Guggenheim in the 'forties and has since had several exhibitions of drawings which spoof the conventions of the vanguard. This season Ripley, who also does research into the microscopics of botany, fixes his eye on an apocalyptic vision: "The Bomb." This is how the world explodes: first comes an invasion of wiggly clouds; they are the spores from the Mushroom. Behind them rises the flood, but it is a wishy-washy flood which has gingerly extracted skyscrapers and billboards from a recently horizontal metropolis. When Venice blows up it does so in a green squirt. Hagia Sophia withstands the blast; so does the unutterable Word of Peking; but off the Marshall Islands, fishy spines and sea monsters are drenched by a waterspout and the whale is sore afflicted.    –Eleanor C. Munro, Art News 53, January 1955, 47.

The United States detonated the first hydrogen bomb at Eniwetok in 1952, the Soviet Union countered with a similar device the following year, and the U. S. secretary of State, John Foster Dulles, announced a policy of massive retaliation in 1954. At least three of the drawings Dwight made in that latter year featured exploding skyscrapers. I used to think these verged on trite. They since have become painful as well, which does not redeem them. One hurtling tower bears the name TIBOR DE ... The whole series, called "The Bomb," was exhibited at Tibor de Nagy Gallery in January, and at The Three Arts in February, 1955.    –Douglas Crase, Both: A Portrait in Two Parts, 2004.